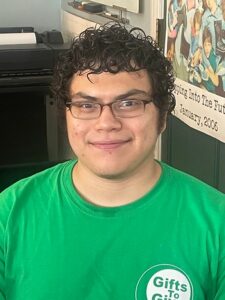 Our Senior, Student Intern is Diego Marroquin.  Diego started with us as a Freshman, Pre-Med Student at UMass Dartmouth and will be a Senior in September. Diego has already been accepted at UMass Medical School in Worcester and will be leaving us in December.

We hear a lot of talk about making a difference, Here we have a most perfect example of exactly that! Rather than we telling the story, we asked Diego to tell us:

“When I came to the U.S. I experienced a cultural shock. Like me, many students are experiencing the same so I decided to partner with Gomes Elementary where 85% of the students were born abroad and have a different culture. English is not their primary language. I designed a 7-week program to start a conversation about the importance of culture, and how it defines who we are. The first day the students were shy, but by the second week, they were explaining each other’s culture to one another. Seeing them be proud of their heritage and share it with others was one of my goals. It culminated with the painting of a world map and a quote picked by the students that reads: “Strength lies in differences, not in similarities.”

This experience was meaningful to me because I came full circle. Nine-years-ago, when I came here from Guatemala, I was in the shoes of the majority of the 83 children that I worked with. Many were making the same mistakes I made when I was learning English. I saw myself in them and in the short time I spent with them, I became a role model and hopefully inspired some of them to work harder to achieve their goals. Most of these students wanted to learn English and go to college to help their families.

I was the one that gave them a little bit of hope since I am the living proof that they can achieve their dreams if they truly apply themselves. The kids made me realize that I can make a difference and the power to make that difference lies within me. Seeing the kid’s participate and share aspects of their culture with me and their peers made me see the impact I was making on them and has encouraged me to continue this work. Despite the challenges we might face, nothing is impossible.

My message was simple: to help the kids understand different aspects of their heritage and be proud of those aspects while accepting and understanding the differences that exist among people who come from different cultural backgrounds. After all, strength lies in differences, not similarities. While I was giving out the certificates, I felt a mixture of joy, accomplishment, and hope for the kids. Seeing how their eyes lighted up when they received a piece of paper with their name was something out of this world.”