Local bicycles sprung from the slammer!

The below article was written by Steve Urbon at the Standard Times in New Bedford
Oct. 2, 2015 – Newspaper Story HERE

ACUSHNET — Police Chief Michael Alves stepped carefully down the bulkhead stairs of the Parting Ways building and into the unlit basement, and he surveyed the stacks and rows of bicycles that had been accumulating there for the past eight years. The Police Department’s impending move to a new building on Middle Road is forcing the department to clean out its current home, and one would expect that these bikes would be consigned to a recycler, so to speak. 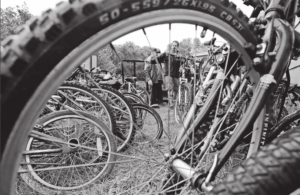 But Kim Camara was to arrive momentarily to do what he has done for several years now in other places: take the better bikes out of the basement where no one claimed them and take them to his shop at Yesteryear Cyclery in New Bedford. There, Camara will refurbish the bikes and then donate them, 10 at a time, to GiftsToGive. That’s Jim Stevens’ charity, which last year moved to Titleist Drive in Acushnet and saw its donations double. Stevens and his platoons of volunteers will then give the bikes away when one of its many partner social service agencies finds families that need them.

Friday morning, in a steady rain, Chief Alves was joined by Camara, Camara’s helper William Cova, and GiftsToGive volunteer Bob Cormier. One by one they hauled the bikes into the daylight, Camara doing a quick triage as they passed through his hands. This one yes, that one no. A pile of the bikes is forming for the recycler after all. “These would take too much to repair and it wouldn’t be worth it,” he said. He knows his business and he works fast. Most of the bikes are nothing special, and some were pure junk from the time they were manufactured. Cova said that many of them were made by the same manufacturer under different names for different department stores. Eventually the team got to the last of the bikes and Camara added them up. Thirty-three were deemed worthy of refurbishing, and 29 failed the screening. Camara’s brightly colored delivery van soon filled up with the bulk of the better bikes, to take them in and begin work. Camara said he often gets bikes donated at his shop that get the same treatment. But he said there are a few bikes, not in this batch but in others, that are worth some serious money, hundreds of dollars. “Not to say anything bad about GiftsToGive, but what I do is sell those bikes and give GiftsToGive the proceeds,” he said. It’s a bigger bang for the buck. Those proceeds recently resulted in a check for $1,000 for GiftsToGive.

In case anyone is wondering, Yesteryear doesn’t supply helmets, and helmets are required by law for those 16 and under. But at the charity’s sprawling headquarters in the old Acushnet Company building, Stevens pointed to several large boxes filled with new or new-looking helmets, ready to complete the package when a bike is delivered.