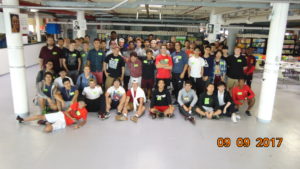 Students from Worcester Academy made a field trip to visit with us last week. Photos from their visit are here. We ordinarily would talk about the experience, but teacher David Baillie was kind enough to send us the following:

“This was the response of a student to a seemingly simple question: “What is Worcester Academy all about?” The question, posed by GiftsToGive founder Jim Stevens, hung over the fifty Worcester Academy students for several heartbeats before it was answered.

We had traveled that Saturday morning from Worcester to Acushnet to fulfill a community service obligation, a school-mandated requirement that is part of every student’s experience. The fifty boys, all upper classmen, were dorm mates; they boarded the bus that morning without complaint, napped or talked or joked around for the hour it took to get to Acushnet, and then assembled in the bare-bones repurposed warehouse that served as the factory’s base of operations. 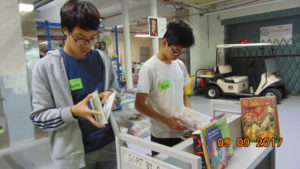 “What is Worcester Academy all about?” Jim asked the crowd. Of all the students in the room, a boy from Kazakhstan offered the response. And he was right: Worcester Academy is about community. The fifty students in the room represented a cross-section of the Academy’s diverse population: from New Hampshire and New Zealand, from Canada to Kazakhstan; they came from England, China, the Ukraine, Taiwan, Russia, Japan, Germany, Korea, Somalia—all living together in the upper classmen dormitory, and from just as diverse a range of backgrounds. Community is exactly what the school is about; it must be in order to cultivate a positive, collaborative, and understanding environment.

The boys really did not know what to expect when they got on the bus that morning. The factory itself certainly took many of them by surprise—it’s not beautiful, nor is it in an economically desirable area. However, form follows function: GiftsToGive is on the frontline of a war with an ugly truth—twenty-four million children in this country are in desperate poverty; another twenty-four million teeter on the brink of the same hopeless fate.

Yes, we are a private school and we arm our students to the teeth with the tools they need to succeed in life. However, there are far fewer silver spoons than one might at first suspect at Worcester Academy. Many of the boys in the factory that morning knew exactly what Jim was talking about; some were from the demographic GiftsToGive serves. Divided into teams, the boys fell to; sorting through clothes and toys, repairing what could be repaired, processing and sorting brand-new clothes and toys and then having to recycle the so-called donations of careless people who use GiftsToGive like a giant recycling bin for their broken and useless things. And there was a lot of both! Other boys went outside to weed and harvest tomatoes from the garden—the tomatoes would go directly to food pantries.

We spent a couple of hours hard at work, and then said our goodbyes—we had another unrelated obligation to get to that Saturday afternoon. On the ride home, the boys once again napped or talked or joked around, as boys do. Teenagers seem to take everything in stride, and a couple of us—teachers who had accompanied them—wondered if the experience had really captured them in the ways we’d hoped it would. 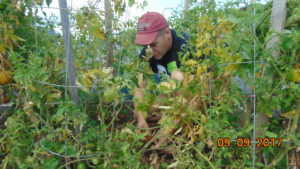 Sunday passed, and then Monday. During evening Study Hall, I came across a group of four boys—not one of them from the same country—engaged in an animated discussion that clearly had nothing to do with academics. I stepped in to admonish them, but I realized that they were talking about something Jim had said that past Saturday: GiftsToGive should open a branch in Worcester.

Over the course of the night, and again on the following night, I asked around thirty students what their impressions were of the charity work we did that past weekend. Of all the answers I got, one motif dominated: “We should have had more time there.” They understood. When that many teenagers from that many backgrounds complain that they should have been given more time on a Saturday to sort through heaps of donations in a warehouse in Acushnet, you know that the experience left an impression. It was a community response.”