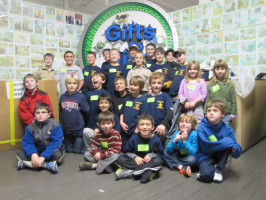 In November the scouts participated in their soap box derby and used the event to: help help a local family, collect donations for a food pantry and collecting “gently-used” children’s things for GiftsToGive.

This afternoon, after school, Pack 32 in full force –  descended on the mill in a literal caravan of vehicles, full of not only scouts, but the treasure they had collected between themselves and other families in Marion.

Jim Stevens, CEO of GiftsToGive said ” The scouts of Pack 32 set two records today; one for the most donations collected by a Cub Scout Pack and two; for the most toys ever inspected, cleaned and processed in one-hour. Talk about fun, blazing speed and philanthropy, and I’ll tell you the story of Marion Pack 32!” Stevens went on to say: I give the parents of these scouts huge praise, for supporting them, not only in their scouting endeavors, but in helping them to understand through their doing, the power of giving and service.”

Photos from our afternoon are here. 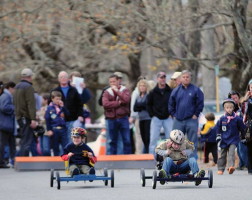 The boys of Marion Cub Scout pack 32 invite residents to an afternoon of fun and philanthropy as they race soapbox derby cars down Holmes Street on Saturday, November 16 from 11 a.m. to 2 p.m.

Donations to New Bedford’s Grace Episcopal Food Pantry and GiftsToGive will be accepted. GiftsToGive collects gently used clothing, books and toys for children in need. A bake sale will also be held with all proceeds going to one Cub Scout’s mother, who is fighting cancer.

Those interested in becoming a Scout are encouraged to attend. The rain date is Nov. 17. For more information, email Kristen Saint Don-Campbell or call 508-748-3129.