Dartmouth Middle School thought they’d collected a lot of books for GiftsToGive in 2010 when they collected over 3,200 gently used books for kids and teens in one week.

Then they smashed that record in 2011 by collecting over 6,000 gently used books.

Now DMS students have smashed that record once again by donating 7,154 books! 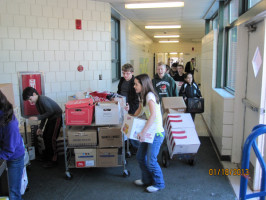 Other activities included a scavenger hunt, and a building activity involving only straws. 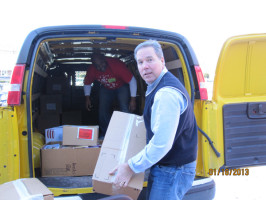 The Principal does the heavy lifting

The book drive was coordinated by librarian Laura Gardner. “It’s really exciting to focus that competitive spirit on something positive like this. Daily announcements on who was in the lead really inspired kids to bring in more books. Many of the books that were donated are in near perfect condition; I couldn’t be happier about the outcome!”

All the books have been delivered to GiftsToGive where they will be sorted by age level and distributed to school libraries in SouthCoast Public Schools and to thousands of local children in-need.