A Recipe for Hope: An Inspirational Grandfather, A Remarkable Third Grader, Tomatoes, Honey Bees, Tangible Sincerity and a Cast of Thousands! 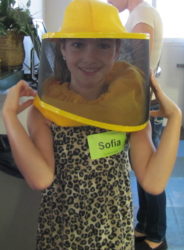 We are in the business of creating a more caring community – daunting, to say the least, what with global warming, terrorism, congress, the senate, Wall street, child poverty, recent politics and random shootings. I’ve written about this before, nothing new, just maybe a little more depressing. We have reached a place as a society that is truly upside down.

Now, for a story of hope and its most amazing, albeit convoluted, recipe. If you’ll bear with this writer, (It’s not the shortest of stories) I promise to fit all the disparate pieces together to explain why I am so hopeful.

This story comes together when we meet Sofia, a 3rd grader, who wanted to spend some time volunteering over her summer break (her mom Christine is amazing). Sophia happened to arrive at the factory the same day that our friends at Honey Bee City sent us the new additions to our beehive and a free youth helmet. Two minutes after Sofia and her little brother and Mom arrived, our resident volunteer gardener and chief beekeeper, Bill O’Keefe, arrived, to check on the honey bees and our new tomato crop!

Here is where I must digress for a few minutes, for some context. 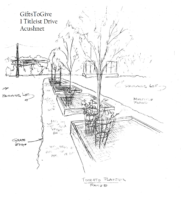 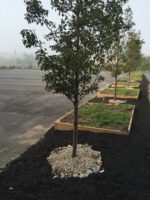 Actual realization of a dream

Let me back up to the summer of 2015. I was talking to Wayne Walega. Wayne’s wife, Ruth Ann, is an Uber Volunteer and she spends hundreds of hours with us each year. Wayne had volunteered to put moldings around my office door and to fix the dressing room doors in the thrift store. Wayne is pretty handy, but I had no idea of his secret designer and drawing skills. I was telling him how we had lost our tomato garden because of the move from New Bedford to Acushnet and how it would be wonderful to somehow re-build it, problem being: there was no easily accessible land, as our huge parking lot had just been paved. Wayne reminded me that there was a small strip of land between the lots and he could envision putting raised beds there. The next morning my inbox had an email from Wayne with a drawing. 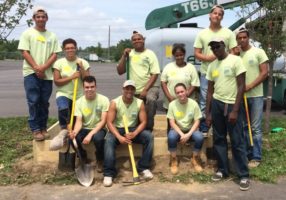 A week later, I received a call from Erik Andrade, a talented artist and community activist, who was managing a summer crew of students from The Trustees Of  Reservations in Westport and asked if we had a meaningful project. I showed Erik the drawing, he made a parts list and his crew built the beds.

Jim Bruce at E.L. Morse Lumber in Wareham supplied the lumber and hardware needed. Jim is one of our earliest adopters and acts as a permanent drop-off location for Wareham and vicinity donors. 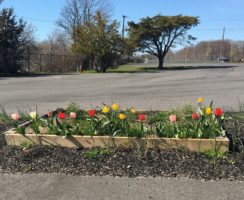 Then Paul and Jilly from Great Scapes Nursery wrote another chapter of our story. Paul showed up one morning with two truckloads of soil and stone, plus all the special fabric needed to line the beds. We were good to go – except we had missed our planting time to grow tomatoes. Then another wonderful turn; our philanthropic landlord had eight pear trees planted, one between each bed!

When school starts back up, we go into high gear facilitating thousands of local students in community service. One of our student groups from Tabor Academy, fostered a crew to put the beds to sleep for the winter. What they did not tell us at the time was that they had planted bulbs for a spring surprise! So … in March of this year, we were visibly reminded of what spring really means. I was struck by a Charlotte Bronte quote –  “Spring drew on…and a greenness grew over those brown beds, which, freshening daily, suggested the thought that Hope traversed them at night, and left each morning brighter traces of her steps.”

Semi-fast-forward to May of this year, and we re-connect with local attorney and tomato aficionado Bob Feingold who gifts us, every season, three to four dozen baby heirloom plants. This season we received plants from 22 different countries! Cindy Haskell from Advanced Marine Technologies provided us with an unlimited supply of Organic Gem, Liquid Fish Fertilizer. Troy, our go-to-guy for fixing ANYTHING, hooked us up to a water source and an outside spigot. 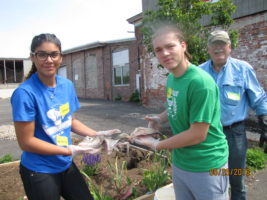 Then we went into orbit! Mattapoisett grandfather, Bill O’Keefe, volunteered to head-up our summer tomato project. Bill is husband to our indefatigable, uber-volunteer Mary O’Keefe. Bill cleaned up and prepped the beds. Bill ventured out into the wilderness of South Dartmouth to meet with Bob Feingold to take possession of the baby plants and on a beautiful May day, students from City On A Hill High School helped Bill plant. Talk about service learning. Most students had never planted. Bill brought heads and tails of four-dozen fish, one for each plant. Of course, the Native American and Pilgrim conversation was explored! Bill then proceeded to develop a most wonderful drip watering system, combining conservation/stewardship, science and math and we were off! 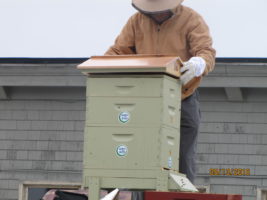 Simultaneously, while we were planting we went into the Honey Bee Fostering Business! We learned about the plight of honey bees and we wanted to help save them. We invested in our first hive from our friends at Honey Bee City. So, the Head of our Horticultural Division, Bill O’Keefe, volunteered to become Chief Bee Keeper. Our Honey Bee Moving-in and Fostering story.

Fast forward to early August and we’re blessed with a most abundant crop of tomatoes, it looks to be over a thousand pounds of organic, heirloom tomatoes. Most we’ll gift to the PACE Food Pantry, downtown New Bedford and the balance to our uber volunteers to take home with them.

For me personally; I am awe struck! I find myself in a place of great hope because I can see it, it’s tangible. I feel like Linus when he talked about the great pumpkin. “Each year, the Great Pumpkin rises out of the pumpkin patch that he thinks is the most sincere. He’s gotta pick this one. He’s got to. I don’t see how a pumpkin patch can be more sincere than this one. You can look around and there’s not a sign of hypocrisy. Nothing but sincerity as far as the eye can see.” 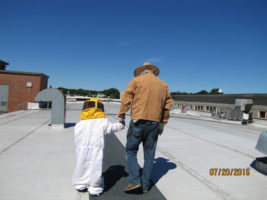 What does a New Bedford 3rd grader named Sophia and a Mattapoisett Grandpa named Bill have in common?

We really need to look at how we are doing. We’re stuck in the negative, in the status-quo. Getting un-stuck is not rocket science, what it takes is a different mind-set. I think that changing a mind-set could very easily start with volunteering.

Volunteering is the ultimate exercise in democracy. We vote in elections every so often, but when we volunteer, we vote every single time about the kind of community we want to live in.

There are dozens of places to volunteer; if you need help getting started, visit with us, just once. We’re open every day except Sunday for volunteers; or just drive by and see our parking lot tomato garden for yourself!